There is no decision that we can make that doesn’t come with some sort of balance or sacrifice.
– Simon Sinek 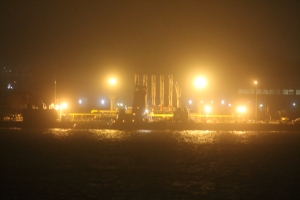 One of the things I like best about where I live is the view. I grant you it isn’t one that everyone would enjoy but I don’t feel the need to sell anyone on its particular attractions. From the small deck in my back yard, I look across Courtenay Bay (part of the Port of Saint John for those of you who might be unfamiliar with the geography) to an oil export terminal. Beyond the terminal, a closer look reveals a wallboard plant, a power plant and, before giving way to natural landscape, various structures with the centerpiece flame that marks an oil refinery. In the distance and to the right, all the way to Red Head, a ridge of greenery completes the horizon, one where the moon is wont to rise and cast its light upon the bay. Full moon at high tide provides the best display, but even when the tide leaves mud flats exposed, the reflection can mesmerize.

A couple of years ago or so, when my wife was still alive, we thought about giving this place up. We looked at one house in particular, on the West Side, that had a great many features we appreciated. We went so far as to have a tour of the property and we came away intrigued but not yet convinced. I remember talking about it in the car as we were driving back home. Much of what we had seen was easy to like but we were unsettled, unsure, without knowing precisely why. We were ready to give ourselves some time to allow the impressions to settle but when we walked up the front steps, stood on the porch and looked out to Red Head across the water, any thoughts of leaving were abandoned. For whatever reason, we were attached to this very contradictory view.

I say contradictory because few panoramas offer such a stark contrast between the manmade and the natural. While Saint John has many other pockets of industry, the conglomeration of activity from the waterfront to the refinery and everywhere in between is without parallel. Among the many things I’ve learned watching the ships come and go is just how quickly the turnaround is and how constant the traffic. A ship comes in on one high tide and leaves a couple later at most. And with few exceptions, another eager vessel is waiting to take its place. Watching tugboats turn large ships displays both power and agility. Taken altogether, it is fascinating. I never tire of it.

Courtenay Bay itself provides lots to see. I follow the tide tables and thoroughly enjoy the ebb and flow. Invitations for photographs present themselves almost daily regardless of time of day or season. For all that this body of water is a commercial centre, it still illustrates the persistence of natural forces. My imagination frequently tries to conjure an image of the tidal action of the Bay of Fundy and I have my own little laboratory just out my front or back door. As I said, the view is not for everybody but I’ve grown ever fonder of it through the years.

Many people find the industrial landscape disheartening. They lament the ruination of the natural scene and I do understand such sentiments. Wouldn’t it be nice if we could eliminate all industrial blight and return the land to its original state? Environmental orthodoxy would answer quickly and forcefully “yes”! As for me, I just don’t think it’s that simple. However much we need to be responsible stewards of our environment, we need to recognize equally that the commerce I can observe on a daily basis contributes in large measure to our being able to enjoy a standard of living that is second to none in the world.

My Courtenay Bay scene provides the perfect study in contrasts. Smokestacks, the persistent hum of machinery, ships coming and going, all set against a backdrop of cold Atlantic seawater and rolling greenery stretching into the distance. As a believer in moderation, I have a hard time with extremism on any front. Those who object to industrial growth and development in virtually any form are no better than those who would ignore every environmental concern for the sake of a profit. 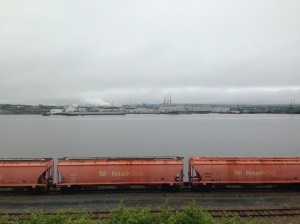 My view across the Bay tells me that we, humanity, are here and we are having an impact. It could not be otherwise. At the same time, it reminds me of the natural beauty that is part of our heritage, a beauty and a heritage that we need to protect. Unless we believe that abandoning all of the amenities of modern life is the way to go, we need to come to an accommodation that reconciles those two seemingly opposing views. As with so many things these days, the public debate might lead you to believe this is a stark either/or question. No surprise, it’s not that simple. “Accommodation” is the key word here, and it works both ways. Balance is seldom easily obtained but rarely has it been so urgently needed.

2 thoughts on “The best of both worlds?”