___________ is rich in radicalism, and anyone who says that our society has drifted into fatalism and apathy should get out more.
– Geoff Mulgan

As we approach the onset of federal electioneering (“approach?!?” you might ask, in light of the onslaught of advertising we’ve been seeing for the last few months, if not longer), I’ve found myself explaining my views of certain realities related to politics to a friend of mine. To my mind, she is an excellent representative of a large portion of the electorate: smart, informed in a general way (reads the local paper, watches the news, and picks up information from other sources), and likely to vote for any one of the three major parties. In short, she belongs to that demographic coveted by all parties, the undecided voter.

It’s easy to understand her dilemma. As campaigns develop in the run-up to an actual election, the sales jobs that each of the parties mount are unified in their simplicity. If you are the Conservatives, most of your time is taken with drilling the somewhat clever play on “Justin” Trudeau’s name – “Just Not Ready” – into the national consciousness. To all those who complain that largely negative advertising is objectionable and does not work, I would agree with the former but generally object to the latter claim. Even if you find it distasteful, there is a reason why parties return repeatedly to a negative approach: it has been shown to work. Plant doubt in the minds of voters and that doubt can grow. When, like my friend, you don’t spend a great deal of time thinking about politics and elections, the things that stand out in memory become very important. It is often said that we shouldn’t be overly influenced by first impressions. That might be a fine ideal but, in practice, I’m not sure how true it is. If you can get your message, however simple, planted in people’s brains, it has potential to grow. With so many distractions available in modern life, making anything particularly memorable in an area where people seem generally indifferent has to be considered a victory of sorts.

For the Liberals, things are ostensibly a little easier. I can’t say how things are anywhere else in the country, but here in Saint John, New Brunswick, that “stuck in memory” phenomena has taken hold for many people. What has stuck in people’s memory is the name Stephen Harper and there seems to be very little nuance in the way in which many view that name and what he is thought to represent. I can’t think of another politician whose name awakens such visceral loathing. I realize that is a harsh assessment but I’ve encountered it on many occasions, usually in the company of such words as “dictator”, “control freak”, “bastard” – you get the picture. In a country so long dominated by two major parties, you might think the Liberals would be able to make it a cakewalk. The “we’re not him/them” rule is one that we should all be familiar with. Popular wisdom in this country says that governments aren’t so much elected as unelected. Capitalize on Stephen Harper’s unpopularity among many and the road to victory for Canada’s once “natural governing party” would seem to be assured. Or that’s how it used to be.

But then came the last federal election and the decimation of the Liberals accompanied by the rise of the NDP to Official Opposition status. I was among the many who would have thought of the NDP surge as a flash in the pan, an anomaly in the historical power swap of Liberal and Conservative governments. But then Rachel Notley cruised to victory in Alberta and, all of a sudden, all bets were off. This has meant that the NDP has had to think long and hard about how they might sell themselves to a hesitant electorate. Speaking from the East Coast, the historical general reluctance has been largely the result of, in my opinion, fear that the NDP would be too radical, that an NDP government would upend the generally centrist record of previous governments in favour of a socialist approach that would be inimical to business, largely answerable to unions and without constraint in all matters of fiscal accountability. So it is that NDP ads to date have focused on a friendly, ordinary guy, very much “one of us” you might say. Thomas Mulcair, if people know of him at all, has, to date, been little more than a name. As the NDP suddenly finds itself in the lead in most polls, getting to “know” Tom Mulcair becomes extraordinarily important to all concerned. Whoever manages to win the “first impression” contest – and it has to be a first impression that can withstand the inevitable counters from opponents – will have gone a long way toward winning the day. Since the Conservatives and Liberals seem largely content to rail at each other (with some exceptions beginning to appear), early indications would be that the NDP might win that particular battle. 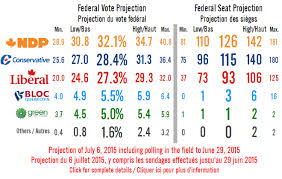 In a very real sense, little of what the next few months bring by way of campaigning will help my friend make up her mind. My take on the entire thing is determined by my faith in our system, in her, and in all like her. Repeatedly we hear complaints about any number of elements deemed wrong or imperfect in Canada’s model. While acknowledging that it could be improved, I will continue to defend its effectiveness. Ours is a country that knows a peace and security increasingly rare in the world, it can seem. Whatever the result in the fall, I choose to believe we will continue to develop peacefully, securely and without fear of military coups, insurrections or other systemic upheavals. And THAT, more than anything, is what I’m always voting for. We may not be perfect, but we’re pretty damn good.