Do not believe ISIL is manageable
– Jeanne Shaheen

Around this time last year, I was traveling in Europe and one of my objectives was to visit Auschwitz. I have been a student of the Second World War – especially the Holocaust – since as early as junior high school. I still remember reading William Shirer’s The Rise and Fall of the Third Reich in grade 8. Ever since that early exposure I have continued my struggle to understand the minds behind what stands, for most people, as the greatest crime ever perpetrated by human beings.

I can’t say that the day I spent at Auschwitz unlocked any door to understanding although it did deepen my mystification at humanity’s capacity for cruelty and extend my appreciation of the enormity of the undertaking itself. As I toured the interpretation panels and rooms in the main camp before continuing on to Auschwitz-Birkenau (the extermination camp), architectural drawings of the infrastructure of death at Birkenau were chilling. No skull and crossbones or other insignia graced the pages. I could have been looking at plans for the construction of a local Wal-mart. The design itself was ingenious, ensuring a rapid processing (from assembly, to killing, to cremating, to cleaning up) of as many as 5000 people at a time. 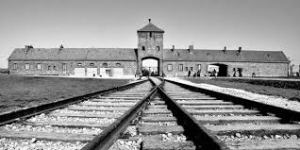 Among the most affecting elements of the displays for me, though, was a simple picture taken of the unloading of the trains at the siding made famous in Schindler’s List, Sophie’s Choice and a myriad of other films chronicling elements of the Holocaust. What caught my eye wasn’t what was happening in the background – men, women and children being herded on a platform while soldiers and dogs patrolled the scene; rather, I was drawn to two figures in the foreground. They appeared to be lower ranking personnel just slightly above the regular ranks and their backs were turned to the scene unfolding behind them. One of them was smoking a cigarette.

In tune with my Wal-mart comment earlier, remove the background context and these guys could have been having a smoke-break behind a restaurant or on their break before returning to their desks. Their detachment was palpable. I imagined possible elements of their conversation: “So, Hans, how was the game last night?” “Could have been better, but I played well. How’s Frieda?” “Well, she had the surgery and the prognosis is good. We’ll know more in a couple of days” “Tell her I said hello!” And so on. This wasn’t a picture of horror (although it was); rather, it was a photo of “just another day at the office”.

The Jew always lives from the blood of other peoples, he needs such murders and such sacrifices. The victory will be only entirely and finally achieved when the whole world is free of Jews
– Julius Streicher

More than anything, it is that ability to stand apart from what is happening and see it as normal that always gets to me. When I was back from Europe, I supplemented my trip to Auschwitz with a BBC documentary on the subject and one part of that brought the point home to me even more. An interviewer was talking to an elderly gentleman who had been part of the Einsatzkommando during the war. This was a special force that accompanied the regular army as it advanced the Eastern front. Its mission was to round up Jews and execute them. The focus of the interview was on one week in particular where this guy had taken part in an “action” that saw him and his cohort kill at least 10,000 and bury them in a mass grave.

When asked what he felt as he was participating in this, the gentleman responded: “nothing”. The interviewer, trying to remain objective, struggled to hide her consternation and asked him to explain: “they were the enemy; they had destroyed our businesses and were out to destroy us”. When he was asked to supply any specific example from his experience of the enemy doing any such thing, he couldn’t but that in no way shook his conviction that, indeed, those he had participated in killing were the enemy. My rational self wants to cry out: “Women?!? Children?!? Babes in arms?!? The Enemy?!?!?!”

But I know it’s pointless. The longer I’ve thought about it and the more I’ve read along the way, the more convinced I am that I will never be able to penetrate the mystery of human cruelty and our uniquely human ability to convince ourselves that even the worst conceivable action is justifiable.

I write about this today as I struggle to process the events of this past weekend in France, another of those events, similar to 9/11, that serves to focus our attention on something that remains at the periphery of our concerns unless, like all of those refugees fleeing the battlegrounds these days, it touches in some way upon our more immediate world. I join with every other voice in the world that wants to see the perpetrators of this particular outrage held to account.

At the same time, I hope we can work to understand who and what it is we are up against. Similar to Hitler, Nazism and the virulent anti-Semitism that fueled the Holocaust, no argument can be had with ISIL/ISIS. Sadly, for this immediate case, nothing can be said to bring the adherents of this particular group back from the brink. Most important, for all of the world that opposes the actions of ISIS/ISIL, is to know and understand who we are fighting.

Its rise to power is less like the triumph of the Muslim Brotherhood in Egypt (a group whose leaders the Islamic State considers apostates) than like the realization of a dystopian alternate reality in which David Koresh or Jim Jones survived to wield absolute power over not just a few hundred people, but some 8 million. – Graeme Wood http://www.theatlantic.com/magazine/archive/2015/03/what-isis-really-wants/384980/

To put it another way, this is not a fight against some radical interpretation of Islam, against Muslims, against “the other”. It is not a fight to “preserve our way of life”. We are faced with a group that, through its own particular logic, has arrived at the conclusion that the individual life has no value other than the way in which it can be used to serve the ends of its ideology. Similar to Hitler, this is fanaticism at its most perilous. That which most of us (we like to think we are the norm) hold to be the greatest value, the central miracle of the universe – our existence – is irrelevant to the ends of ISIL/ISIS.

The Nazis and Hitler would not concede defeat until Hitler himself was dead and the “empire” he had created was reduced to a street or two in Berlin. We must remain united in our abhorrence of everything ISIL/ISIS does and be prepared for a fight that may never be “won” in an absolute sense. History tells us that someone will always find a way to believe that life isn’t as important as some cause or ideology or other.

The struggle today, where ISIL/ISIS is concerned is to recognize that this group does not represent anything more than itself and those who adhere to its precepts. Xenophobes, ultranationalists and fanatics of other stripes will look at the actions of ISIL/ISIS and see a chance to further their cynical ends. Fear has always been fertile ground for hatred, intolerance, prejudice and support for oppression. For those of us who want to hold to our love of life and diversity and to values of acceptance and tolerance, we need to continue to remind ourselves and others that ISIS/ISIL is the latest manifestation of a recurring human horror. A certain appeal to religion might be the breeding ground for these maniacs, but an ISIS/ISIL suicide bomber is no more a Muslim than Jim Jones was a Christian.