To see the world in a grain of sand,
A heaven in a wildflower;
Hold infinity in the palm of your hand,
And eternity in an hour.
– William Blake, from Auguries of Innocence

If I was going to spend the best part of a day at Volcanoes National Park and still be back before dark I knew I would have to be on the road early so, before the stroke of 6 am, I was on the road. And it was dark and the first 20 miles or so of the main highway was narrow and twisting with a speed limit of 35 mph. I’m glad I was doing it now rather than on the return journey, though.

According to Lonely Planet, I should have been a couple of hours getting to the main gate of the park but I meandered and didn’t arrive until around 9:30. Along the way, I managed stops to see some great surf, a black sand beach and green sea turtles lounging on the same. Just another day on the Big Island.

For some reason I hadn’t paid much attention to temperatures – assuming I suppose that it must be hot and glorious everywhere – so I was somewhat surprised when the external temperature was registering as low as 14 degrees Celsius by the time I was at the park. That being said, considering I was now at elevation around 4000 ft, I shouldn’t have been surprised. Fortunately, coming from Saint John, New Brunswick, where a warm summer’s day tops out around 18-22 if you live along the coast, it wasn’t that big a deal.

I headed straight for the visitor’s centre because I had a plan. After yesterday’s grueling trek down and back to the Captain Cook Monument, I was looking for something a little bit easier and I thought I had found it in the Kilauea Iki trail, a 4+ mile loop that took you down to and across the caldera and back up the other side. I had certainly heard the word caldera before but I had never thought much about what it meant. I was about to find out.

I always say that I love traveling anywhere – and I do – but I have been to some places that stick with me for a number of reasons. Sometimes it’s the magnificence of human achievement (cathedrals in Europe, the Angkor complex, Macchu Pichu), others, the beauty of nature (the Fundy Trail, Ha Long Bay in Vietnam, the Canadian Rockies) and still others for quite specific reasons. Kilauea Iki falls into the last category.

The Kilauea Iki trail begins from a parking lot a short drive from the Visitor’s Centre. Immediately upon arrival you can look down some 400 feet and see your destination. As I discovered, a caldera results when a vent for lava collapses. This is not your gushing down the mountainside brand of volcanic activity. Think of water backing up in a drain. The water is still trying to get out but it has nowhere to go so it simply fills the tub.

From above, the caldera doesn’t look like much. By now I’m accustomed to the ripples and eddies of solidified lava although it certainly looks interesting. So off I go, guide in hand, down the trail.

As you descend, the enormity of what you are approaching begins to assert itself. You are at one end of the caldera and the other end is very far away. When you step out of the surrounding vegetation, the first impression is size. What looks from above like a rippling but smooth surface is, in fact, what I might imagine a battlefield would look like after the bomb fused all the earth.

You enter the caldera at the level of the “bath tub ring”. No, I didn’t make that up. When you look at the “high lava mark” – where the molten lava reached before the eruption slackened and the lava began to drain a bit – it takes your breath away. More than anything for me, the analogy, “bath tub ring” is so apropos! If you’ve ever laid in the tub after a long day of hard and dirty labour, you know what such a ring looks like. Here’s one that encircles a hardened lake around a mile from end to end.

As you begin the trek across this broken land, you pass the vent from where the lava poured. This is the most broken part of the caldera, a huge conglomeration of broken lava that reminds me of asphalt, if it were a couple or more feet thick and the size of a chunk of four lane highway. They build up in small mountains here and there and ripple as you might imagine the ocean would if flash frozen.

The trail across is marked with piles of rock and you are not allowed to venture outside its limits but I was forced off the path briefly in order to retrieve my sunglasses. I had my Tilley hat on – my companion for many years now – and it has never blown off, anywhere. Now it has. 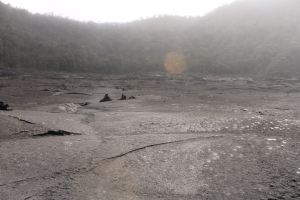 Of all the things I might have expected as I went down to the Caldera, wind wasn’t one of them. Was I ever wrong. Once past the initial entry point, you enter the open plain, you might say. The wind was strong and gusting the rest of the way and one gust caught the hat and away it sailed, even though I had the chin strap on. My sunglasses were perched on the hat and they flew further and down the side of one ridge. It looked safe enough and, after some hesitation, I made a quick trip down and back.

I mention this not because I was doing anything especially dangerous but because it is an object lesson in what makes this trip across the caldera so remarkable. With every step, I grew increasingly aware of the power that could fuel the event that created this landscape. Steam was venting in the distance, the land looked broken and tortured, yet, other than the wind, all was calm and serene. Somewhere beneath my feet Pele, the goddess of fire, was slumbering.

When I was done with Kilauea Iki, I spent time doing a few other things, last of which was a trip to the Jagger Museum where you can view the Halema’uma’u crater, currently venting gas. Also, you can see the larger caldera, of which Kilauea Iki is but a small part. Driving down Chain of Craters Rd. provides an even clearer view of the enormity and extent of past eruptions and lava flows. Power and grandeur everywhere I look. And yet this is but a speck on a tiny planet amidst a universe beyond comprehension. All I can say is “wow!” and that just doesn’t quite capture it. Thank god for poets.