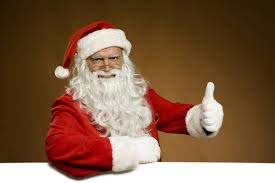 Such a seemingly innocuous question: is there a Santa Claus? Imagine my dismay when I listened to a commentator on CBC parsing the various consequences of not being truthful with your children: will they see their parents as liars? Will they believe that lying is acceptable? Will a moral darkness descend upon their souls and turn them into sociopaths intent on deception, destruction and the downfall of civilization as we know it?

Okay, so the last question is for effect, but I really don’t think it is that much more absurd than the first two. How fragile do we imagine our children to be? Have we forgotten our own childhoods so completely? Is the fact that I don’t quite recall the moment when I learned there wasn’t a Santa Claus proof that I was so traumatized that the memory is forever embedded in my subconscious? Are the harmful effects being felt in ways of which I am unaware?

If you’ve been reading this blog (or if you haven’t), I would refer you to my first post and the two parts that followed where I sought to define the “progressive” mentality, one that I believe is at the core of the “Santa Claus crisis.”

I’m reminded of similar crises over which I have rolled my eyes: fears of allowing children to watch Bugs Bunny cartoons (and Looney Tunes in general) because of the violence; not releasing the original Bambi cartoon because Bambi’s mother dies; discouraging competition in team sports, to name but a few.

All such initiatives arise from a simplified view of the child, a largely mechanistic one, which imagines growing up as the acquisition, by an empty vessel (the child), of a series of desirable conditionings and/or traits that will create “the adult”. As with so many of the tenets of the progressives’ faith, none of this is well-defined but it is implicit in the approach.

So, my parents lied to me: Santa Claus does not exist. Rather than seeing this as some violation of the trust a child should have in adults, why not view it as taking a chance and allowing the child to deal with disappointment and to come to understand the world a little better? Mommy and Daddy were trying to allow for wonder and expectation and the unique joy that comes from watching that wonder unfold in the life of a child. Parents pursuing some kind of selfish agenda at the expense of their child? Oh, c’mon! Can anyone really be serious?

If this segment on CBC is any indication, sadly, the answer is “yes”. Somewhere along the way, over the last twenty or thirty years especially, it seems, the notion has taken hold that children are endlessly impressionable sponges. A child is, in essence, an incomplete human being, completeness being the purview exclusively of the adult, and then only possible if the said adult has been formed according to the vague moral precepts at stake in the Santa Claus dilemma.

This is where the notion of a mechanistic view of humanity is most evident. In my view, children are complete beings at a certain stage of development, a development which is determined by forces too various to mention, many of which are either beyond our control or mysterious in themselves. The mechanistic view imagines a model human being that can be created only through the ongoing adjustment of the unfinished product.

I prefer to believe that Santa Claus serves for wonder, imagination and any number of ineffable things. When the day comes that the truth emerges, the child will be a little older and wiser. Or maybe not. But that’s life.

Life: mysterious, complicated, dynamic and a source of endless wonder. The early experience of that might just be the best Christmas present we can give.

3 thoughts on “Mommy, Daddy, is there a Santa Claus?”